VyprVPN is a highly-regarded VPN service that has been around for 10 years, but its sleek new app design makes it look like one of the freshest VPN services available on the market today. The latest user-friendly design follows fresh on the heels of VyprVPN's groundbreaking public audit to verify their claims of being a true No Log VPN service. By not logging any user data VyprVPN is able to provide some of the highest levels of security and privacy possible in the VPN world. 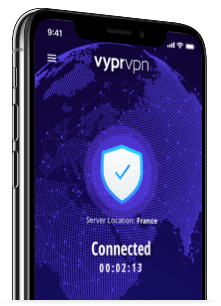 Golden Frog, the company behind VyprVPN, are Internet veterans who actively advocate for a free and open Internet and are incorporated in Switzerland, a country with favorable privacy laws. Their "About Us" section on their website demonstrates how transparent they are as a company, which is a refreshing change of pace for a VPN service.

As for their product, VyprVPN, one of the things that make them stand out from the crowd is that they own, engineer and manage their own VPN servers. This means there are no outside parties hosting their servers which ensures no unwelcome access to VyprVPN servers is ever possible. The fact that they own and manage their own servers also means that they can optimize their VPN network for fast streaming speeds and reliable connections.

Let's look at the highlights listed above in more detail.

In November 2018, VyprVPN became the first VPN service to be publicly audited so that they could provide transparent proof that they are a No Log VPN service. We had previously seen other leading VPN services claim they were No Log VPNs only to learn later that they had been exposed for not being truthful about all of their claims. The audit of VyprVPN was conducted by an independent firm called the Leviathan Security Group.

VyprVPN's Servers are Different Than Their Competitors

VyprVPN operates and maintains server clusters in North America, South America, Europe, Asia, Africa, and Oceania. They do not operate individual VPN servers but instead run VPN server clusters each consisting of hundreds of VPN servers. Other VPN providers, for example, only offer server addresses such as UK1, UK2, and UK3, but VyprVPN offers an entire UK1 server cluster for customers to access instead.

VyprVPN's server clusters are a group of individual servers optimized for performance and scalability regardless of the number of simultaneous connects. In other solutions, if a hosted VPN solution loses one server, a customer connected to that server will not have access to the VPN service until they reconnect to an alternate server, such as UK2 or UK3. Due to the clustered nature of VyprVPN's servers, if there is an issue with an individual server, users will not be impacted, and their service will not be at risk of being interrupted. But most importantly, because VyprVPN hosts their own servers, your privacy and security are protected end-to-end.

From their US servers:

From their UK server:

Netflix Canada, along with popular services such as TSN and NHL.tv are also accessible from their Canadian server. Very impressive!

Chameleon is VyprVPN's secret weapon for bypassing restrictive networks around the world. It is a proprietary VPN protocol which scrambles OpenVPN packet metadata, so it is not recognizable to deep packet inspection (DPI) while keeping it fast so it doesn't impede streaming speed. Chameleon uses the unmodified OpenVPN 256-bit protocol for its underlying data encryption. The result is that VyprVPN users using Chameleon should be able to bypass restrictive networks put in place by governments, corporations and ISPs that try to throttle their bandwidth.

VyprDNS is VyprVPN's very own encrypted, zero-knowledge DNS. When users connect to the Internet they usually rely on their ISP's DNS servers, which are often configured to comprehensively log their Internet activity and even censor certain websites. For example, Google DNS logs a user's IP address, websites visited, geolocation data and much more. However, VyprDNS is a zero-knowledge DNS which means it does not log any DNS requests.

VyprVPN provides a NAT Firewall with their service as an extra layer of security for users. Hackers and bots scan the Internet for unprotected devices that they can exploit for identity theft and spamming, and they can gain access to systems through Internet connections left open by applications. Using these vulnerable connections, they can install malware and steal personal information. The purpose of a NAT Firewall is to block any harmful scans from reaching devices or computers when a user is connected to VyprVPN.

VyprVPN provides apps for all of the following devices

And has a CLI for Linux.