Most web or mobile development companies face various dilemmas when they start a new project. One of the main dilemmas they face is selecting the right programming language.

If you check out, more than 600 programming languages are available in the market. Don't panic. You don't need to know all of them as not all languages suit your project.

Nevertheless, certain programming languages are highly preferred by developers worldwide. Some examples are Dot Net, Java, and Python. Now, dot net developers will always prefer the language they are familiar with. The same goes for Java and Python developers.

So, being a project manager or an owner of a web development company, how will you choose the right language for a project?

Before we compare these three languages, let's check out all three languages in brief. Also, it will help you choose the right programming language for your project.

Java is one of the most used and preferred programming languages across the globe. Developers simply love this wonderful language due to some astonishing benefits it has to offer to them.

Java is an open-source, general-purpose, object-oriented programming language that is easy to learn and implement. Java mostly acts as a server-side language for back-end and Android development. It was founded in July 1995 and was later acquired by Oracle.

Let's check out some statistics about Java.

Undoubtedly, Java is still relevant and going strong. Some mobile applications made from Java are Twitter, Uber, NetFlix, Spotify, etc.

Python is a highly preferred, user-friendly, and versatile programming language that is used for various applications such as software testing, website development, and machine learning.

It is a general programming language that can create various programs. Developers love the language’s versatility. Furthermore, Python is also easy to learn, even by beginners.

As per the report, Python was the 2nd most popular programming language among developers in 2021.

You can use Python in data analysis, software development, task automation, data visualization, and other applications.

Moreover, its simple syntax makes it easy for anyone to read and understand. You can build and deliver projects with Python in just no time.

What is Dot Net?

Dot Net, or as it is most preferred, .Net, is a programming framework developed by Microsoft with programming guidelines and rules to build various applications.

The Dot Net framework can work with various programming languages such as C#, C++, VB.NET, etc.

Mostly, dot net developers use the C# programming language to build web and mobile applications on the dot net framework.

It is an open-source, cross-platform web and mobile application development platform that has carved a niche.

Now that you briefly know all three programming languages let's check out some striking parameters and compare all three languages.

On the other hand, Python applications lack speed and performance compared to Java applications as the interpreter workload is very high. Also, Python has a hefty memory usage.

Dot Net offers a simple programming language with array bounds, type checking, and garbage collection. It provides more efficiency and durability compared to Java and Python. Apart from that, Java and Dot Net's performance and speed are similar.

We all want to develop highly durable and stable web or mobile applications, don't we? Hence, comparing stability is highly essential.

As Java comes up with continuous updates and upgrades from the libraries and the community, it makes Java-based applications more stable. It is the main reason why enterprises rely on Java when it comes to application development.

On the other hand, Python is a highly versatile programming language with continuous upgrades.

The latest Python 3.10 version has many new features and functionalities that make Python-based applications as stable as Java.

No one wins here as all three languages offer high levels of stability.

Now, let's check out the frameworks on which Java, Python, and Dot Net applications are built.

Python uses the Django framework, one of the most preferred application development frameworks. When developing a cross-platform application, mostly Python developers use the Flask framework.

On the other hand, Java developers mostly use Spring. Java is one of the highly versatile and easy-to-use frameworks with outstanding features and functionalities.

All three languages have superior frameworks. No one wins here, as well. 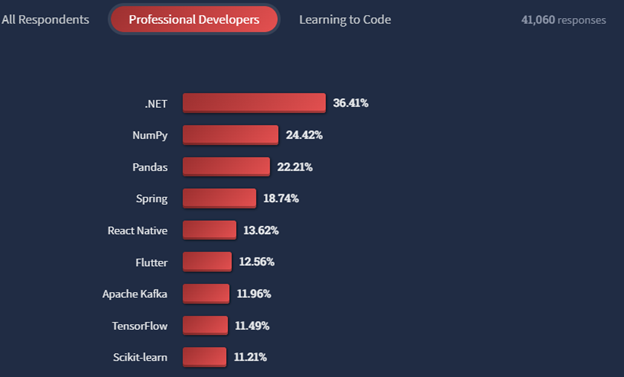 One of the essential things to know before finalizing a programming language is whether it supports multiple languages or not.

Regarding language support, Java supports a single language that can be used over multiple platforms. However, you can run programs written on this platform across different operating systems.

On the other hand, Dot Net supports almost 20 programming languages, including C#, C++, Perl, Vb.Net, and others. Python also supports many languages such as Java, C#, and C++.

Coding in Java is complex and requires technical expertise. A beginner in Java might end up creating code and functional errors.

As Java and Python are open-source platforms, there are some security concerns. On the other hand, Microsoft, the owner of the Dot Net framework, ensures the security of the applications developed with the framework.

So that was it. Java, Python, and .Net, all three languages, have some distinctive features and functionalities.

When you get a new project, go through the project requirements, and you will be able to determine which language to opt for the project.

Consider hiring Dot Net developers if you choose the Dot Net framework for your project to create robust, secure, end-to-end, and feature-rich web and mobile applications.